North Cornwall has one of the most spectacular stretches of coastline to be found anywhere in the world. Anyone who has watched the television drama, Poldark, will be instantly familiar with these vistas but to really appreciate them you have to be there for the breeze, the sound and the scent of the ocean.

The Atlantic Ocean provides an awesome and ever-changing backdrop to the towering and rugged cliffs, and spectacular rocky promontories are interspersed with idyllic sandy coves and picturesque fishing villages.

North Cornwall is exposed to the full force of the Atlantic rollers and on the high plateau above the slate cliffs the sparse trees are shaped by the prevailing wind. At intervals the coastline is punctuated by narrow gorges where fast flowing streams lined with broad-leafed woodland cascade into the sea. The close-grazed grassland on the clifftops makes for superb undulating walking and expansive views along the coast are a constant feature.

In spring and early summer the cliffs and the Cornish slate ‘hedges’ are draped in carpets of wild flowers: in particular thrift, sea-squill and campion. In high summer valerian, monbretia and foxgloves wave in the breeze. A wide variety of seabirds nest on the cliff faces and peregrine falcons can be seen swooping on their prey.

Our walks will sample the splendour of Cornwall’s wild and rugged Atlantic coast with its numerous magnificent headlands and highlights will include Pentire Head which provides one of the finest views in Cornwall; the charm of Port Isaac (Doc Martin's Port Wenn) with its jumble of fishermans’ cottages; the incomparable setting of Tintagel Castle perched on the clifftop; Boscastle with its narrow fjord-like harbour (recently a location in 'Poldark') and Forrabury Church (film location in 'Saving Grace'); the church of St Enodoc with its crooked spire, nestling in the dunes beside the Camel Estuary; and the peaceful isolation of The Rumps where Laurence Binyon sat to write his ‘Ode to the Fallen’, now an integral part of our Remembrance Day services. 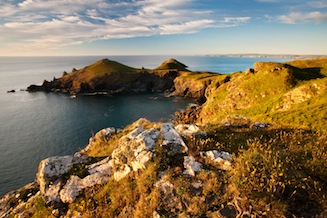 We stay at the Wellington Hotel which is located in the beautiful village of Boscastle, overlooking the picturesque harbour. The hotel dates back to the 16th century and is one of the oldest coaching inns in Cornwall. Author Thomas Hardy stayed at the Wellington Hotel and fell in love with the village (not just the village, he met his wife Emma Gifford there) and its setting on the rugged coast of North Cornwall. The Wellington Hotel offers very comfortable accommodation, along with a restaurant which features quality local produce on its excellent menu and holds two sought-after AA rosettes for the quality of the cuisine and service. All of the bedrooms have ensuite bathroom facilities.