The sea cliffs and sandy bays of Pembrokeshire provide coastal walking at its very best, and in 1952 the area was designated as a National Park. The rugged cliffs provide a home for a huge variety of sea birds and from the spring to the autumn the path is a blaze of colour with the myriad species of wild flowers which flourish in the mild south westerly breezes. Off-shore islands appear to float on the sparkling seas and rocky tors crown each headland.

History and legends abound in Pembrokeshire, and our walks take us through Neolithic field systems, past ancient burial chambers, promontory forts, chapels and shrines established by Celtic wayfarers travelling between Ireland, Cornwall and Brittany. In a survey completed in AD146 the Romans, conscious of the dangers of navigating the rocky coastline, describes St David's Head as 'The Promontory of the Eight Perils'.

St David's is the smallest city in Britain and, better described as a thriving and attractive village. St David's was once a major place of pilgrimage (two pilgrimages to St David's was the equivalent of one to Rome) and it's city status is due to the presence of its glorious 12th century cathedral and the ruins of the lavishly decorated 13th century Bishop's Castle with its carved stonework.

We walk some wonderful stretches of the Pembrokeshire Coast Path, including those around the rocky headlands of St David’s Head, Strumble Head and Pen Dal-aderyn; the secluded inlets and bays at Porthgain, Abereiddi Bay, Porth Clais, St Non's Bay and Caerfai Bay; and the beautiful sandy strands at Newgale and Whitesands Bay.

Highlights will include visits to the charming coastal villages of Abereiddy, St Justinian's, Porthgain, and fjord-like Solva; Carreg Sampson Neolithic burial chamber and the ancient standing stones and field systems on St David's Head; the stunning views across The Bitches to the off-shore island wildlife haven of Ramsey; the views both to and from the rocky promontory of Carn Lledi; and the tiny cathedral city of St David's, our base for this tour.

On the Wednesday of each holiday there will be the option to take the boat across Jack Sound for a day trip to the Island of Skomer. Skomer is teeming with wildlife, the most famous occupants being puffins, grey seals and Manx shearwater. Guests on our June holiday will be able to walk amongst the puffins, which go about their business as if no one were there. By September the puffins will have migrated, but there will be the special thrill of seeing grey seals and their young pups on the beaches. The boat fare and landing fee are included in the cost of the holiday, as is a cream tea on return to the mainland. 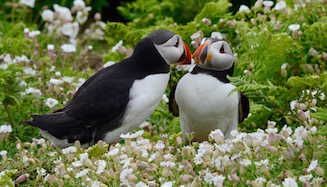 We stay at at Warpool Court Hotel, which stands in extensive gardens overlooking St Bride’s Bay on the edge of St David’s. Warpool Court is something special; set in a magnificent coastal location, with breath-taking views both out to sea and inland, it provides a very high standard of comfort in well appointed rooms, and the hotel’s restaurant is renown for the excellence of its cuisine. The hotel has a covered heated swimming pool. All bedrooms have ensuite bathroom facilities.

In process of updating ....