4 days walking based in Whitby

Whitby, our base for the eastern section of the Coast to Coast, is a town with a wealth of history on display. Whitby is still a working port, however, the town's period of greatest prosperity was the 18th century when it was a centre for the whaling industry and the shipping of coal. James Cook lived in Whitby and his ship, the Endeavour, was built locally. 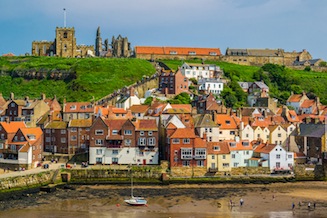 There is a fine old 13th century abbey above the town, and St Mary’s parish church, which is reached by 199 steps, has a Norman tower and a carved interior which is reminiscent of the lower decks of a wooden sailing ship. Whitby has a wide range of inns, restaurants and takeaways offering food in the evenings. It also has a number of shops where one can purchase the makings of a packed lunch.

The daily meeting point in Whitby is outside the Co-op in Langbourne Road.

Accommodation; There is plenty of accommodation of every variety in Whitby and details can be found on the following websites:

Alternatively, an accommodation guide can be obtained from the Tourist Information Centre in Whitby, whose contact details are as follows:

How to reach Whitby by public transport; There is a railway station in Whitby but services are limited and it is sometimes best to take a train to the mainline station at either Scarborough (25 miles south) or Middlesbrough and then use the Arriva Bus service No. 93 to Whitby. National Express run limited coach services to both Whitby and Scarborough.

If you are completing more than one section of the Coast to Coast the dates allow for a full day (the Saturday) to make the transfer from Keswick to Richmond and/or Richmond to Whitby. For the convenience of guests without their own means of conveyance, who would prefer not to use public transport, there will be a minibus transfer available at a cost of £30 per passenger, per transfer.

General information on the North Yorkshire Moors can be found on the following websites:

Cicerone Press and Trailblazer both produce an informative guidebook for this route.