Covering a distance of 184 miles, the Thames Path National Trail follows the course of one of the world’s most iconic rivers from its modest rise in a Cotswold meadow to its surging presence as a tidal estuary at the Thames Barrage. The river passes through numerous picturesque villages, fine towns such as Marlow and Henley-on-Thames and the cities of Oxford and London. The river flows past images which are imprinted on Britain's national consciousness; the dreaming spires of Oxford, Windsor Castle, Runnymede, Hampton Court Palace, the Palace of Westminster, St Paul’s Cathedral, and Greenwich - the centre point for time the world over.

There is very little ascent involved along the way and the path is good, however we have avoided making the daily mileages too high as this would go against the very character of the walk - and of the river itself. This is a walk to relax, enjoy and take time over. There is a wealth of history and tradition associated with the Thames and the beautiful landscape through which it flows. All in all, too good to rush! 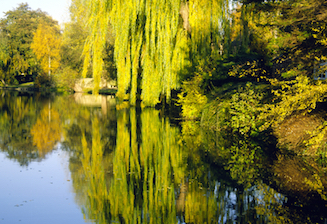 The Thames Path divides neatly into three sections, so we offer three holidays, each of which offer fine walking in its own right and when strung together enable our guests to follow this beautiful 184 mile (294km) route in its entirety.

The itineraries detailed below keep all the stages to 13 miles or below. If you would like to walk longer or shorter stages we will be happy to tailor the itinerary to suit your requirements, so far as the distribution of accommodation allows.

This 55 mile (88kms) stretch of the path will take you from the source of the Thames near Kemble through the quiet pastoral landscape of the southern Cotswolds to finish at Oxford. The early stages of the walk pass through the most sparsely inhabited part of the Thames valley with the attractive towns of Cricklade and Lechlade being the only settlements of any size. Lechlade, where the statue of Old Father Thames sits beside St John’s Lock, grew up at the highest navigable point on the River Thames, and from there you will see the river grow in stature. 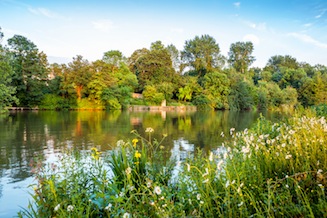 Highlights of the walk will the villages of Buscot and Kelmscott, the wild flower meadows around Lechlade and the handsome and historic university city of Oxford.

This 82 mile (129km) stretch of the Thames between Oxford and Windsor sees a much more powerful river surging over numerous locks and weirs and through the Chiltern Gap. It passes through the attractive riverside towns and villages of Abingdon, Dorchester-on-Thames, Pangbourne, Henley-on-Thames, Marlow, Goring, Streatley to finish in Windsor. The area is typified by neat riverside villages, attractive locks and colourful river boats. 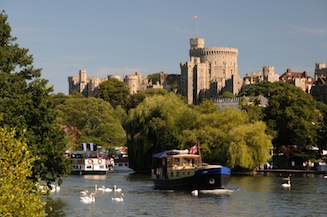 Highlights of the walk include and the walk from Oxford to Iffley across the famous Christchurch Meadows, the 'Sandford Lasher' and the thatched Barley Mow pub at Clifton Hampden which Jerome K. Jerome described in Three Men in a Boat as “the quaintest most old-world inn up the river”, Mapledurham Lock, the museum of the River and Rowing at Henley-on-Thames, the beautiful suspension bridge at Marlow, and Windsor Castle, and the oldest continually inhabited, and largest inhabited, castle in the world.

Windsor to the Thames Barrage

The final 52 mile (83km) stretch of the Thames between Windsor and the Thames Barrage is full of variety. A broad sweep of the river leads to Runnymede Meadows where the Magna Carta was signed in 1215 and where the Magna Carta Memorial erected by the American Bar Association and The John F. Kennedy Memorial stand in an acre of land granted to the USA in perpetuity. Beyond Runnymede the surroundings take on a distinctly metropolitan feel, but this does not make the Thames Path any less of a walk as the stretch between Shepperton and the Thames Barrage serves to show London at its best. Around Richmond, Kew, Hampton Court and Marble Hill Park there are parks and open spaces aplenty; at Teddington there is the largest lock system on the river; through Westminster there is architectural splendour and a grand view up to St Paul’s Cathedral from the Millennium Bridge; and on the South Bank there is a glimpse of Dickensian London. Greenwich Park and the Royal Observatory are highlights of the walk, and the Thames Barrier a fitting conclusion. 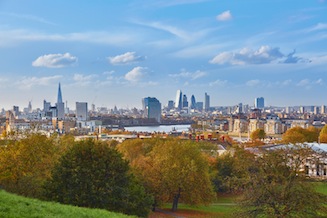 There is, of course, a huge variety of accommodation in London (with a range of prices to match!) and also a wonderful public transport system, with rapid links to locations right along the Thames Path. This means that the best plan is usually to 'fan out' from a central base (hotel, self-catering apartment, guesthouse, budget hostel), rather than move on to new accommodation each night. Another advantage of such a plan is that you can decide day-by-day how to divide up the miles and how to combine the walking with sightseeing.

With all of these considerations we do not quote a price for an 'off-the-peg' holiday but will be happy to discuss your specific requirements and come up with a solution especially for you.