West Penwith, the far western tip of Cornwall provides a dramatic landscape where rugged, granite-studded moorlands reach down to a spectacular Atlantic coastline and the sea surges into picturesque, lonely coves. This rugged splendour is beautifully balanced by an abundance of wild flowers on the cliff tops. Spring comes early in West Cornwall and by early April the walker is able to enjoy a fine display of fresh greenery, primroses, violets and camellias. In high summer the moorland is ablaze with the rich purple and gold of heather and gorse. 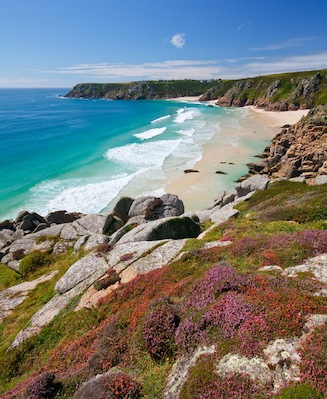 The granite tors which overlook the coastline are dotted with stone circles, stone rows, ancient cromlechs and mysterious standing stones such as the Mên-an-tol. Many of these stones predate Stonehenge by several thousand years and contribute greatly to the mystique of the area. It is no coincidence that the vast majority of Cornwall’s fascinating folklore and mythology has its origins on this small, isolated peninsula. The starkly beautiful chimneys of abandoned tin mines are a reminder of Cornwall’s proud industrial heritage, and the reason that this area is now designated as a UNESCO World Heritage Site.

The itinerary will vary depending upon the grade and duration of the tour, but most will include a visit to the pretty village of Zennor, with its touching mermaid legend, and the tiny church where the ‘mermaid’s seat’ is on show; a walk around Land’s End for magnificent views from England’s most westerly point; the picturesque fishing village of Mousehole; Porthcurno where the famous open air Minack Theatre is cut into the cliff face; beautiful Lamorna Cove; and the ancient standing stones on the West Penwith Moors.

Your holiday in the Far West of Cornwall will be based at a comfortable family-run guest house close to the centre of the attractive town of Penzance, or in the picturesque fishing village of Mousehole. Your room will have ensuite bathroom facilities and you will have a choice of continental or full English breakfast. Both Penzance and Mousehole have a good range of restaurants and pubs serving meals in the evening.

Your holiday in the Far West of Cornwall will be based at the Old Coastguard Hotel in the picturesque fishing village of Mousehole. The hotel occupies a prime position above the harbour and overlooking Mount's Bay, St Michael's Mount and St Clement's Isle. The brasserie restaurant at the Old Coastguard prides itself on using the freshest fish, caught right on the doorstep, and quality Cornish meat and vegetables. In 2013 the Old Coastguard was named the Country Dining Pub of the Year by the Good Pub Guide. The hotel gardens and terraces are a particular feature, and all of the attractive and well-appointed bedrooms have ensuite bathroom facilities.

The price displayed is based on occupancy of a double or twin-bedded room, but an upgrade to a feature room can be arranged, subject to a supplement.